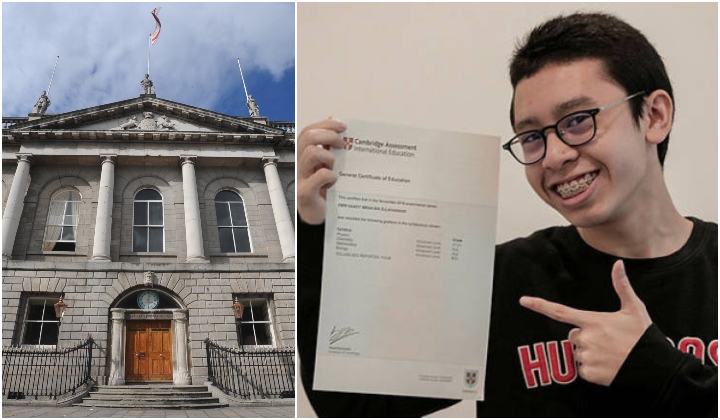 Recently, Malaysian youths have been making waves and generally excelling in life a lot.

Just this year alone, we’ve heard of a group of young Malaysians who created bricks made from recycled plastic, a 13-year-old boy who made a powerbank from scratch, a 19-year-old female rapper who was featured in New York Times, and a matriculation student who installed an RFID lock on his dorm door.

This September, when the academic year starts at the Royal College of Surgeons (RCSI) in Dublin, Emir Haady will become the youngest student there.

Yes, he is going to start studying to become a surgeon AT 16 YEARS OLD.

How in the world did he get there so fast?!

And if that doesn’t make you feel bad enough already, he studied for the exam in just 10 months and scored 6A+, one A1 and one B1.

Those good grades had him doing his A-levels at just 15.

During which, he obtained an A for Chemistry and Math, and an A+ for Physics.

Speaking to The Sun, Emir Haady said that his desire to study medicine stemmed from both family influence and a deep passion for the discipline.

“It’s a combination of both … I initially wanted to become an astronaut, but as I grew older, at 11, I started to like medicine a lot.

I can’t see myself doing life any other way than by being a doctor.”

Emir via the Sun

Emir Haady volunteers with his dad, who is also a doctor, at the Kelana Jaya mosque.

While he was volunteering, Emir Haady noticed how other people had hardships and life challenges and this realisation is what ignited his passion to become a surgeon.

Alright Then GIF from Alrightthen GIFs

In fact, Emir Haady wants to become a heart surgeon.

Apparently, he was intrigued by the vital organ after learning about it during biology class.

“The heart just fascinates me – how it works – and I just want to do what I love which is to become a heart surgeon,”

Emir via the Sun

COVID-19: The TLDR Version Of A Global Health Crisis

“He absorbs whatever he is taught, he learns fast and he is also very obedient.

In fact, Haady plays a lot. He enjoys an occasional game of soccer or swimming and he’s good at board games and computer games. If we (the family) play with him, he’s usually the champ.”

She also feels very blessed to have such smart and obedient children.

“I am not one of those mothers who needs to use a cane. I allow my children to learn on their own.”

Bill Hader Sign Me Up GIF from Billhader GIFs

Well, whatever you’re doing, Datin. It seems to be working. Now, where do we sign up to become one of your children?