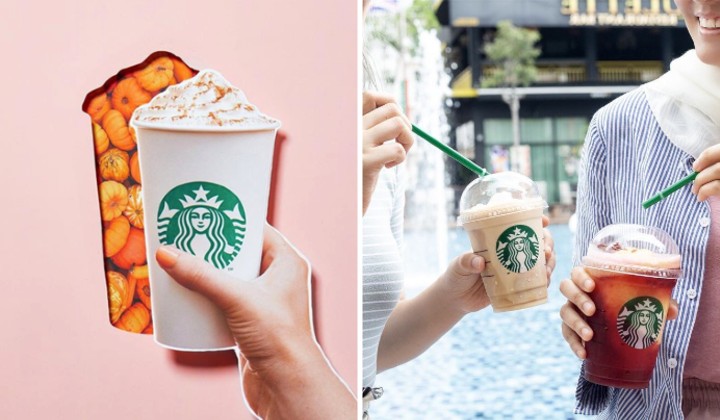 Heads up, everyone! Starbucks Malaysia will be spicing things up for all you cup heads out there this Monsoon season.

It’s been a long time coming, but Malaysians will finally get a chance to trick or treat themselves to a delicious cup of the widely popular fall-flavoured beverage.

But why is this coffee, milk and vegetable concoction so trendy? It’s not like we have autumn or thanksgiving here in Malaysia…

Well, believe it or not, it has to do with psychology and a whole lot of marketing…

The PSL hit U.S markets back in 2003 and is only sold within a short period of time between October and December.

The reason why people go cray-cray over the latte is linked to a psychological theory called “reactance”.

This explains how we as consumers respond so strongly to stuff like limited-time offers and limited edition promos.

Simply put, the “get it while it lasts” strategy used in marketing the PSL is the reason why the drink is so popular, even outside the U.S.

To put that into perspective, Starbucks has been teasing over the release of this delectable drink on their social media for the past few days, having fans carving away for a sip of the squash even more!

So that and the addition of the fear of missing out (FOMO) plays on your anxieties to not miss the chance to grab a cup for yourself.

If everyone else is having it, why should you be the only one left out, right?

But if you’re wondering what the PSL actually tastes like, well you can be sure that its made with pumpkin, spice and everything nice!

The drink is made with Starbucks signature espresso and steamed milk combo mixed with pumpkin, cinnamon, nutmeg and clove that makes for a flavorful and mouth-watering refreshment.

The latte is also topped with whipped cream and pumpkin pie spice which makes for a sweet and spicy drink perfect to warm you up during this wonderful rainy season.

And for those who’d like to avoid caffeine, don’t be chai… There’s also a coffee-free version available.

Plus, here’s a pro tip; ask your friendly neighbourhood barista to add in a dash of caramel to your cup. You’ll definitely fall in love with this delicious drink for sure!

So don’t worry too much about why you are drawn the drink, just head on over to your nearest Starbucks and enjoy your PSL either hot, iced or blended at RM17.50 onwards, because it’s just basic psychology!

Like a phoenix rising from the ashes, Akmal returns to the newly improved TRP to uncover cold truths and walk the fine line between deep and dumb.

Starbucks Msia’s Halloween drinks; one misses the mark, one gets bloody good [Review]